In this day and age when we find ourselves carpooling with people we might find ourselves stepping over if they were unconscious on the sidewalk, just to avoid filling our tanks for these prices, who’s going to pass up a bargain? With that thought in mind, I signed up for every discount deal I could find in the hope that I could continue to enjoy the lifestyle to which I had become accustomed. Oh wait – I mean the life to which I had always wanted to be accustomed.
The first deal I found was for a deli that I always wanted to try (always as in, I heard about it a year ago). I purchased two coupons, which would be enough for 3 sandwiches - perfect, since they had nothing YK (youngest kid) would eat.  The purchase was made in December and we had until the following June 23 to use them. Six months - plenty of time!
Maybe if I had paid attention to the details on the deli’s website I would’ve realized they are only open Monday through Friday, 8 a.m. to 4 p.m., in a town nowhere near where any of us work. That’s all right, no hurry. It’s only March.
Wait, what’s today? June 22??? Nothing like waiting until the last minute, right? Fortunately, my youngest daughter who at 16 is a new driver and more than eager to drive to even the most mundane destinations, was able to pick an order up for us on the last day. Hurray for teenagers!
A rose is a rose. A museum, not so much.
The second deal was for the Maine Maritime Museum in Bath which we used in July for a family day trip. This museum was really a great choice that I would recommend to anyone. It was chock full of interesting exhibits and we had no trouble spending all afternoon exploring. It was a successful outing - an accomplishment with kids who are no longer kids, and a husband who always will be.
There was an accommodating outside picnic area, which we took full advantage of with our packed cooler. It was a bit awkward though, when we sat down and started rifling through our supplies just as a seasoned volunteer began an hour-long talk on the museum’s history… right in front of the picnic area. Oddly enough, we were the only ones eating. Everyone else seemed riveted to their spots listening to every detail from the museum’s beginning to today. We sat munching on our sandwiches, trying to chew the chips quietly and use head nods and hand motions rather than saying, “Pass the potato salad.” It felt like all eyes were on us. They may have actually been on our Doritos.
It turned out to be a very inexpensive day. At half price for the four of us, I felt very accomplished having purchased something that would ensure a day of quality family time. That is, until my husband came across an even better bargain the next day – four tickets for the price of one. How did this happen? How did I let him beat me out, the one who takes 5 minutes to two-finger type out “deal”? Luck of the draw, I guess. But I had an even better bargain in the works!
I had managed to snag half price tickets to – are you ready?? – the only cryptozoology museum in the world, which happens to be right in nearby Portland. I was beyond excited! We planned our Sunday afternoon around exploring this unique display. In total, we needed about five minutes. There’s a reason there is only one museum of this kind in the world.
Taking on the project of developing a never-before-created museum is quite ambitious, and I don’t want to take anything away from the creator’s obsession. Accomplishment. I meant accomplishment. Plus, this guy has been interviewed for several different documentaries and his museum has been featured on the History Channel and the Travel Channel. No, really! But still. Foot casts? Fecal matter? I tried to take it seriously. I took my time meandering around the display cases (when I wasn’t sucking my gut in trying to get by anyone else in the same very cramped vicinity), even trying to ask pertinent questions about the more elaborate adaptations of various… various… I’ve got nothing. I know this guy has to have a real job, but darned if I could figure out what it is. Our brief time at the only cryptozoology museum in the world was amusing and entertaining. Yes, I’ll go with that.
We did manage to walk away with a permanent display of our adventure – a picture of the family with Big Foot. How many people can make that claim?
We won’t go there – because we forgot to...
Another little “deal” that I snagged was a half price coupon for Lowes through a Border’s “OO” (overwhelming offer) program. That was last December 31, when I was told the coupon would be valid until this December 31. Has anyone else heard about Borders going out of business? Has anybody not heard about it? So at this point I’m not absolutely sure we can use this overwhelming offer, which has to be done online where you can’t yell at anybody if they suddenly virtually seize the coupon when you attempt to use it. I keep telling S (Spouse, for those new to my blog) it’s fine, we have until the end of the year. If we get to that last screen and the offer implodes, Plan B would possibly resemble a scene from I Love Lucy where Lucy is crying and gulping air, hysterical over something that went wrong [because of her], and Ricky can’t get mad and he even lets her cry on his shoulder, and I do believe usually buying something for her (in my head that’s how it plays out). Unless S reads this – then I’ll need a new plan. 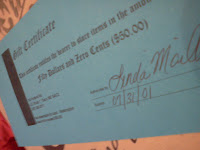 I get offers every day for great deals from various sources, and most of the time I pass them up. Truth is, we are in the top 10 of the world’s worst procrastinators when it comes to using coupons or gift certificates – basically anything that saves us money (which is ironic because if you heard our budget discussions this would not compute). At the moment we have two gift certificates for restaurants, the most recent one given to me two and a half years ago. But wait – there’s more.
Somewhere in my bureau are gift certificates that we bid on - and won - at our annual church fair auction from several businesses that go back at least 9 or 10 years. Does this make sense? Of course not. I could have had a deal on merchandise from a consignment shop (changed hands twice since then), RV supplies (out of business), and a will (the attorney retired). Sadly, deals like that are only a ‘deal’ if you actually use them. Stupid details.
Never put something that expires in a junk drawer
Life is fleeting. Time is not our own. Seize the moment. Live like there’s no tomorrow. I’ve heard it all, and I firmly believe it. It’s time to use those gift certificates and cash in on those coupons! Indulge! Live it up! Enjoy!
It is interesting to note, however, that gift certificates in Maine don’t expire. So I could wait until next week…
Posted by Janine T at 3:38 PM