Who ate the last string cheese?

It is 6:30 a.m. on a weekday. There are four people awake, all vying for the same table, counter, general living space. And there is one bathroom. This can only mean one thing.
School is back in session.
There is something about this time of year that brings out the ugly in the morning routine. It’s bad enough that three of us are attempting to get ready for work at the same time – add an almost-17-year-old high school junior to the mix and there is sure to be added stress, hostility, and the occasional not-so-veiled threat. Our house, not necessarily the picture of tranquility on a good day (except those rare weekend mornings when I can sneak a full mug of coffee in before anyone else wakes up), morphs into a battle zone slash whine fest.
There’s not enough milk for cereal. There’s not enough bread to make lunches. The dog has to be fed. The cat is yowling by the door and her ears are back, which is a very bad sign, and someone had better let her out before she uses a piece of furniture as her personal litter box. The cat puke has to be cleaned up in the hall before someone -- never mind.
Flush(ing) with anticipation
In my dream state every morning has the potential to be a ‘good’ morning.  Everyone wakes up at the right time, exits the bathroom at the right time, and switches places effortlessly so that we’re all able to get to work/school on time. I’m even able to brush my teeth before I leave for work. Hah.
In the real world, we have this.
6:23 I am wolfing down breakfast and staring at the kitchen clock as YK (youngest kid) is making her breakfast, knowing if S (spouse, or you can use your imagination, as I sometimes do during these scenarios) is not out of the bathroom in the next two minutes, OK (oldest kid) won’t have enough time to use it before YK is done eating and needs to get in there.
6:25 I start with a single ‘reminder’ tap on the bathroom door – “Are you almost done?” I know this is more information than anyone wants, but it’s relevant. I usually get a salty, “In a minute!” Greattt.

6:26 I am pacing, knowing I can’t wake up OK (yes, everyone – everyone has made me their official alarm clock) until I at least hear S brushing his teeth. For some reason it seems to be a long process, and in the past I have foolishly roused OK before S was actually out. Complete disaster.
6:27 I’m standing at the bathroom door, trying to yell softly. I must be sure OK has a clear path to the bathroom, because she – unlike YK (who tends to need at least two mom/snooze alarms) – gets out of bed almost immediately after I chirp “Time to wake up, Sweetie.” It’s really more Barry White than birdie – I’m all lower register before 7 a.m.
Yelling softly is an art. Your voice is raised but your volume is – not. It’s like aggressive whispering. “You’re supposed to be DONE. She has to get IN there NOW.”
6:28 S (and we’re not thinking Spouse at this point) strolls out of bathroom, daring to look back at me before he heads to the bedroom and say, “What?? I got out early.” I note that he quickens his pace and closes the bedroom door hastily when I turn his way.
It was my fault, I admit it. Anticipating a roadblock nightmare the first morning of school, I had initially asked that he finish his bathroom routine earlier than his usual 6:30, instead of specifically saying 6:20 or 6:25. I made this mistake once and only once. He now has very specific instructions as to what time he needs to vacate the premises, along with a play-by-play of what will happen if he doesn’t.
In a perfect world, we never run out of waffles
There are several factors that keep us from humming along like a well-oiled machine on weekday mornings.
1)    We don’t share kitchen or counter space well during lunch prep. YK is bright enough to make her lunch the night before. She also readily admits to a touch of OCD, which is a plus in a disorganized household (not mine – I’m just saying it would be).
2)    We don’t plan what we’re wearing the night before – which could be disastrous (stain, still in the laundry, lost in one of the filled-to-overflowing-and-still-unfolded laundry baskets in the living room). YK almost always prepares and knows where her clothes are and their condition ahead of time. Of course, she is a teenager whose wardrobe is much more varied than mine. She has options. I usually have one option - toss it in the dryer with a dryer sheet on tumble for 10 minutes.
3)    We forget to bring the waffles/bread/water up from the downstairs freezer or spare fridge the night before, which often leads to a contest of who has the best reason to not go downstairs and replenish the supply that morning. I am the slowest so I’m usually not part of this argument, thankfully. It can pay to be physically challenged.
4)    One bathroom. I may have mentioned this issue before.
Baby you can drive my car - except for Tuesdays and Fridays
Now that there are four drivers, the next thing is jockeying the cars. OK has her own and would prefer not to share, but when absolutely necessary she will allow us to borrow the car [we gave her] on occasion. YK just started driving six months ago. This is the first school year that she started out by driving herself on the first day. My heart broke. Then I remembered that she’s much better at cluing me in on her whereabouts when she has the car than when she gets rides (and I don’t hesitate for a second to call her cell and track her down, which is particularly mortifying to a teen). Sometimes this driving thing isn’t so bad. Unfortunately, our auto insurance bill indicates otherwise. The trick school this year will be how to borrow the car back from the newest driver.
Fifteen weeks and counting
One day our beautiful daughters will move out and on to their own lives. I guarantee they will insist on no less than 2 bathrooms wherever they live. It will be too quiet here, and my tiny house will then seem cavernous. I will miss them so much I can barely think about it without tearing up. Those manic weekday mornings hardly matter in the grand scheme of things. 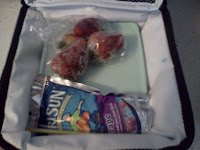 Until then – only 66 more school days until Christmas break.
Posted by Janine T at 7:14 PM