Coffee, Compromise, and the Art of Using Vengeance to Ensure Marital Bliss 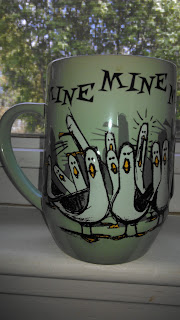 Whadya Know - She’s a My Birthday Too*

I recently celebrated a birthday, smack dab in between our anniversary (29 years – a feat that has shocked many) and Mother’s Day. I sure know how to plan ‘em. My demands – excuse me – my requests were simple: Shower me with lavish gifts and a spectacular dinner and remind me that I don’t look a day over the sound of, “Mommy, I have to go potty.”

All (most) kidding aside, my only real request was to please not make me have to do anything about dinner.  We ordered takeout, and I didn’t even have to pick it up. I did, however, have to bring our sick dog (who spent the whole trip making I’m-going-to-vomit noises in the back seat) to the vet… after throwing laundry in.  It’s not that I minded doing anything. Really, I could have included a request for laundry to be done, and even for the coffee to be set up for the next morning. I just didn’t think it out carefully, and so it got done - by me. The problem, though S might disagree, is that I stink at making demands.

I do, however, have vengeance down to a science.

Do Not Try This At Home

Take certain scenarios with S, for example.  Once in a while he manages to ‘forget’ that he will not win an argument he started with me. Note the words “he started” – because you know if a woman (an Italian woman at that) is put on the defensive, there is the possibility that flailing arms will knock someone out cold. You should probably tack on “in the morning” because for some reason he will, on that rare occasion, have some sort of a brain lapse or something and think he’s going to start my morning off with negative vibes.

I am a morning person. I don’t do “negative” in the morning.  I’m in my groove, my element, my happy place. He should know after all these years to never, ever screw with that.

Have I mentioned how important coffee is to S in the morning? Vitally important. Knowing the little timer is set to start the brewing as he showers, preparing the heady flavor of chocolate cappuccino or blueberry that is his official wake up call, is his motivation for getting out of bed. We set up the coffee pot the night before with enough so he can fill up his travel mug for the drive to work. Unless, of course, he ticks me off before we leave in the morning.

I will cite a perfect example that is still fresh in my mind – and most likely his. Let me preface this with a disclaimer: This account of my actions in no way represents the proper or most effective way to handle such a scenario, and will not guarantee similar results. So don’t come crying to me if the end result is not a Hallmark moment, or even a Lucy and Ricky moment.

It was approximately 6:35 a.m. on a typical workday. I was preparing my lunch… or maybe feeding the animals… possibly just standing in the kitchen wondering if I had a clean shirt to wear – that’s not the point, it was my morning time. When suddenly there was an assault, a veritable spewing of verbal negativity on my person over The Cup. The Cup is S’s sacred plastic, worn white vessel with a flimsy red cover that he uses each morning to mix and drink his daily fiber (he is nothing if not regular). By his dramatic (loud) account, it had been “buried” so far down in the four inch deep (oh yes, honey, I did measure it) sink strainer that he had to dig and dig which caused too much noise and this was not acceptable and people (I believe he knew identifying which of the two other people in the house would have been the nail in the coffin) need to make sure The Cup is conveniently placed from now on. Having vented and now feeling oh so much better, S proceeded to make his way down the hall to get dressed, leaving me in the wake of his wrath. Alone with the coffee pot.

You can see where this is going, right?

As luck (for him, trust me on this) would have it, we were not carpooling that day. Just before 7 a.m., S came flying into the kitchen for the typical last minute scramble for “food, phone, keys and coffee.” Ah, yes. Coffee. He quickly rinsed out his travel mug (which he leaves every day on the counter as if it will magically be cleaned and ready for use the next morning) and lifted the coffee pot to pour his beloved beverage. Wait. What’s this? How is it that there is barely half a cup o’ joe left for me to sip on my travels, his facial spasm indicated.

Then he turned and caught my expression, as I stood by the fridge with a small grin, sipping my second full cup. His face said it all. So did mine.  A flustered, quick rant as he rushed out the door with barely enough coffee in his silver travel mug to make it worth taking, and it was over. For the moment.

Sometime later that morning while at work I received a text – something along the lines of “Are we still married?” I couldn’t help but smile, knowing he saw the error of his ways, which was simply to not screw with my morning. There was a brief exchange of comical messages and the matter was put to rest… or so he unwittingly believed. There was still one part of this issue to be dealt with.

That evening we sat together and had a very amicable conversation over dinner. This seemed like a good time to make an announcement. Though the words were not as formal, the meaning was basically this: I hereby decree that You (S) shall, here on in, be responsible for the cleansing and strainer placement of The Cup, and shall under no circumstances place blame for the location or condition of The Cup on any other person or persons in this residence.

The Decree took effect immediately with no further discussion. Since then The Cup has been washed and placed in the strainer after each use, usually on an easily accessible side, for the next morning. Now whenever there is a coffee shortage in the morning for some inexplicable reason (our coffee maker sometimes has a mind of its own... and sometimes I don't have my glasses on when I'm looking for the cup indicator line), S will replay the last 24 hours in his head to try and recall if there was some sort of breach that would cause me to be thirstier than usual. It’s kind of a fun twist.

I will end with my humble (yet unwavering) opinion. I believe the trick to surviving those pesky little issues that crop up in any marriage is to face them head on with love and respect, a strong sense of humor, and an occasional dose of “Oh, no you didn’t,” infused with some incentive for quickly making things right.

*If you do not understand this reference you most likely don’t know there wasn’t always color television, and you probably also wouldn’t get a Vitameatavegamin reference. I feel sorry for you.
Posted by Janine T at 11:10 AM