Playdough, toilet paper & cupcakes - what more do you need?

It was the end of a celebration that had taken weeks of thought and preparation. Guests were saying their goodbyes and the cleanup had begun. Plastic tablecloths with bits of Playdough clinging to the surface were disposed of. Strips of toilet paper that had been strewn across the floor were being picked up and tossed. It had been a wonderfully wild and crazy event – a wedding shower for The Love Couple.

In case you didn’t get the memo, First Born will be getting hitched in May. Since our family is scattered and none of it is in Maine, we held a Jack and Jill wedding shower in Connecticut where extended family could more easily attend. We chose the parish hall connected to the church Spouse had attended growing up. Even though we barely needed half the hall, it was just the right fit.

The goal of this event, with the help of the bridesmaids and my sister (who was sucked into assisting and barely sat down), was for everyone to just have fun. We supported this idea with a few activities that had guests roaring with laughter.

Once everyone settled down with dinner, we sprang the first game on them:  Name That Movie. Each table was given papers with lines from movies and instructed to work together or on their own to identify as many films as possible, and possibly the character or actor who said it. A few hardcore movie viewers started off by silently bragging through their confident looks and knowing head nods, but nobody completely covered the list. The future groom’s father, however, was a top contender. Now I know who to go to when I want a movie review.

A little later we introduced another little competition. Colorful Playdough was distributed and each table had to create a cake topper. The Love Couple strolled around the room, watching everyone’s interesting interpretations.

The sight of a bunch of adults playing with Playdough was priceless, even those that simply wanted to win.

I halted the addition of props on one table but completely missed the blatant use of them on another table, so I admit to the match being slightly skewed. There was no prize, only the acknowledgment of superior work (or something like that), as my niece put it. Her group proclaimed itself the winner

when the Love Couple – possibly fearing a revolt – decided not to choose one.
.
To test how well the future bride and groom knew each other we played the Shoe Game. Each held one shoe of their own and one of their partner’s. The bridesmaids asked pre-chosen questions and the couple held up a shoe representing who fit the answer best (Who takes longest to get ready? Who does your cat like best?). It turns out they know each other pretty well, right down to who snores the most. The shoes came in handy for the bride-to-be to smack The Fiancé when his answers didn't line up with hers.

After a decadent dessert of gourmet cupcakes followed by the opening of wonderfully thoughtful shower gifts, there was one more game to be held.

Four gentlemen “volunteered” to be adorned with wedding dresses… made of toilet paper. 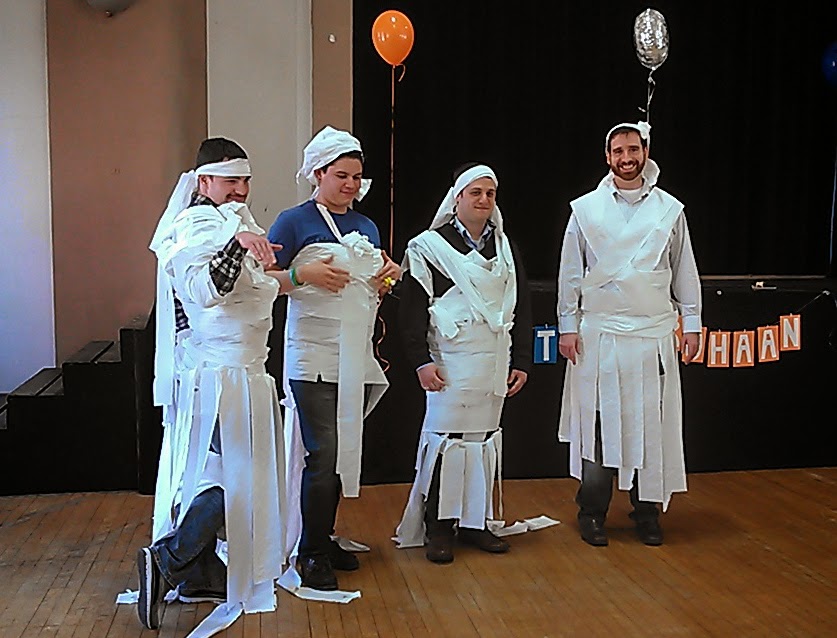 It was a riot to watch participants drape the white rolls around, across, over and under the models. It was also a constant stream of photo ops and notable quotes, for example, “Oooh, we’re doing a veil, too?”

Before guests left we handed out candy in the shape of Lego blocks and people that we made a few days prior, much to the surprise and delight of our guests.

The shower may have been a bit unconventional but the bridal party and I knew the Love Couple had hoped for a day of socializing with friends and family, good food and some fun. Happily, there was no shortage of any of the above.

Family and close friends know First Born and The Fiancé are perfectly paired, but those of us with a few years of experience know marriage does not come neatly wrapped up in a pretty little bow.

Sometimes it’s closer to a Lego bride and groom stuck on top of a pile of Playdough - bound together with toilet paper.