Young and carefree... and then Paris

At 2:46 a.m. my cell phone buzzed with a message from Second Born, who is spending the weekend in Amsterdam (six hours ahead) with two very close friends.

"We talked and decided not to do Paris next weekend in light of the attacks there this weekend..."

She continued briefly with what they think their alternate plans might be. I didn't tell her that I had woken up at 2:42 a.m., and when she messaged me I had been reading several posts on my Facebook page about the attacks, the deaths, and the shock of life altered in one moment. My stomach and mind were churning with the thought that she had been looking forward to next weekend's Paris excursion practically since she began her study abroad in early September. As I lay in bed by the light of my cell phone I knew that we needed to talk with her about Paris and a change of plans as soon as she returned from Amsterdam. But she and her friends had already grasped the seriousness of it and that this changed everything.

I've described myself as living vicariously through my children who have been to many more places in their short lives than I have in my 55 years. It has always given me enormous pleasure to do so because I was afraid to take chances they are taking, and I would like to believe that we've encouraged them to get out there and do what they want to do. This is the time while they are young and carefree.

There is nothing carefree about trying to find out if any of your study abroad classmates were among the injured or dead in this attack. Thankfully none were. But their world just got a little bigger and a little less naive. Despite the fact that hundreds of college students travel to places like Paris all year for these experiences, their main worry is often how many suitcases to bring and where to find the best pubs. Not what to do in case the city you're living in or visiting is attacked.

Maybe I'm the one who is naive. Do they review terrorist attacks in classes leading up to these programs? Do they tell you to be vigilant and prepared on your way to a restaurant or a concert hall? Because my sense has been that my daughter and her friends have been comfortable this whole time with planning weekend jaunts via airplane or train or bus to any number of other countries, while I hold my breath until she sends a message that she is safely back to her dorm in Budapest.

Our children are living in a world where they are using social media to let family and friends know they are all right. A world where Elysee Palace, the residence of the president of the French Republic, responded to this horrible, grisly attack with tweets vowing retribution. A world where sick, pathetic, lying scum are watching and waiting, using these same resources to make contact and recruit and plan, and then celebrating the death of innocence.

I can't wait until she is home on U.S. soil in two months - not that being here means she and her sister  living in Philly - rife with crime - can't be harmed because we are now all too familiar with shootings in theaters and malls and schools, and since even before 9/11 we have clearly not been blind to terrorist attacks. I know she is having a fantastic experience and it's not that I want to take any of that away from her. The exception is that I would take away the conversation they had to have last night about Paris. I would take away the message this tragedy sends, that "young and carefree" may become a distant memory.

I would take away anything that makes me want to stop living vicariously through my children. 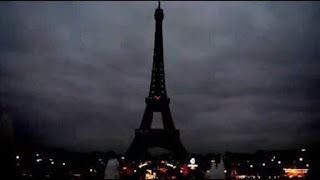