This is just a test... for the empty nest

Winter is around the corner. Those vibrant fall colors we enjoyed this season have taken their final bow. Deep red, fiery yellow and bright orange leaves that made an awning as we drove down country roads now sit in brown piles on the ground. It’s coming to the end of a season, and for our family, the end of one more thing. College visits.

Last weekend we visited Second Born during Family Weekend at her college in Where-the-Heck-Am-I, Pennsylvania. It’s strange to think that besides her graduation in May, we could be completely done with making this trek. Where did these past four years go?

From 2006 to 2010 we did the same for First Born, only it was less than a two-hour drive instead of the interminable nine-hour expedition we just had.  You would think I’d be glad to get these trips over with, I know. But the end of college visits means so many changes and a few uncertainties.

It doesn’t seem like ten years since we left our oldest at her college campus of choice in New Hampshire and we started this process of watching our girls mature and take wing with dreams and goals of their own. It was pretty easy the first time – we only checked out a few schools before First Born made her decision. The second time, not so much. Fifteen schools later, our baby girl had narrowed it down to three. I’ll even miss that part, those initial nervous steps onto a college campus for a tour where a guide hopes to convince you that this is The Perfect College.

First Born gently broke us in to the idea of not having her here with us. Second Born took “not here with us” to a completely different level, between a long distance school and a study abroad. Spouse and I have gotten pretty good at the empty nest thing, but now I realize this has simply been practice. After 28 years of having at least one offspring living home at some point, are we prepared for the real thing? Are we really ready to be on our own?

Just to balance that thought, here are a few things I won’t miss.

FAFSA. This is a long, tedious, exhausting form that must be filled out in order to apply for financial aid – and I don’t know any parent who shrugs it off. It makes you question your memory, your parenting knowledge and your finances.

College meal plans. These institutes of higher learning have a way of convincing you that your student will starve if you don’t sign them up for a full meal plan. Of course, that naiveté diminishes with each year, when you realize your kid has been eating wraps and guzzling smoothies at the school deli… the one that doesn’t take dining hall credits.

Trying to beat every other parent for Family Weekend hotel reservations. If you don’t start in March for that October, you may as well tell your kid that you’re bunking with them for the weekend. Graduation was even crazier. In mid-March the rooms for next May were finally released, and gone within a week. Thankfully, I got through because I was obsessed with checking the website or calling every day since January. I was almost to the point of trading recipes with the reservationist at the Hampton Inn.

Life will change, this era of having a college student will soon come to an end, and the empty nest will be really, completely, officially empty. But I think a part of our kids will always need us. After dragging us through 15 college visits, I have to smile… Second Born will probably beat that record when she brings us to look at apartments. 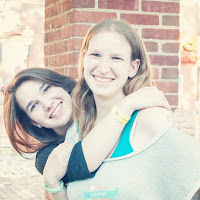 The girls - pretending they'll be around forever