We just passed the four-week mark. It is less than a month until Second Born graduates from college. College? Did I really say that? That's impossible. She was 12 years old last time I looked.

This child has been preparing us for watching her take flight since she came kicking and screaming out of the womb. When she was three years old, "I do it!" was a frequently heard phrase.

Second Born was my rock collector as we walked the beach for as many hours as her little four-year-old feet would carry her. She held her ground during the rough middle school years when friends went through their catty phase. She grew up too fast in many ways when medical reasons kept me from being there as her sounding board in seventh grade, but her spirit, even when bruised, remained strong. She excelled in high school and graduated with honors... and dragged us through 15 campuses during her college search.

I can easily recall a couple of memories that would make her instantly laugh or possibly cringe. When she was six years old and in a summer program, she told visiting firefighters in no uncertain terms that she would NOT be entering their demonstration smoke house. It was around that time that our usually brave, little brown-eyed girl informed us that she was afraid of deep water (i.e., anything over six inches), dark, closed in places and - as previously established - fire. Did I mention this epiphany came during a trip to Disney World? That left the teacups and the Dumbo ride. We also got Mickey and Minnie's autograph at least six times that week.

That spring our little daredevil resurfaced when, during an attempt to jump off the arm of a chair to catch a wayward balloon, she broke her wrist in two places. That shocked the nurse who had asked her if she could move her wrist (she did). She probably should have asked if my child could move her wrist without feeling like it was on fire.

Second Born had her challenges as the kid at home when her sister left for college. She got dish duty and plant watering, and other responsibilities she definitely did not sign up for. I would say the most distasteful of these had to be the weeks she spent coming home to a daily doggy disaster when her sister brought home an abandoned pup from school. Sometimes growing up is far less appealing than you think.

Every parent thinks they’ll have plenty of time to do stuff with their family, that the summer or the holidays will come and life will slow down and we’ll catch up. It doesn’t and we don’t. I swear this child went from asking non-stop questions in the car at four years old to boarding a plane for Budapest where she would turn 21 as a college junior. The expression “Don’t blink” doesn’t even begin to cover it.

This is the child who talked so incessantly at home that we thought her middle school teachers were joking about how quiet she was in class. The one who didn’t touch anything except grilled cheese, macaroni and cheese, pizza and chocolate for the majority of her years. The one who loves tradition and harmonizing to the radio and her cat Sophie.

In less than four weeks, our baby girl will don a cap and gown, hold her diploma and feel all grown up and excited, and maybe a little uncertain about where life will take her. But she will navigate these waters with her usual determination.

Having gone through this with First Born seven years ago, I know graduation day will come and go in a blur, and I know I’m going to cry – that’s inevitable. But under that cap and gown, I will still see a little munchkin with mascara smeared all over her face after raiding my makeup bag. I’ll picture her in a shimmery dance skirt over her t-shirt, her pixie haircut, sitting on our front stoop painting seashells. And I’ll always feel her sweet “I need something” hugs.

Oh yes, some moments you know by heart. 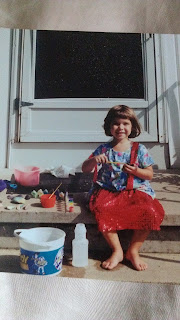