How not to be a turkey

You’re a turkey. Oh, don’t get your feathers all ruffled, we’re just pretending. You and your family or friends make up a flock turkeys. You’ve just stepped out of a wooded area after visiting your favorite pond or bug hunting spot, and you’re about to cross a quiet little road on your way back to your favorite sleeping tree. Yes, turkeys sleep in trees.

You don't stop and look for oncoming traffic because - well, you're a turkey!

But the driver of a car that’s supposed to be doing 25 miles per hour and is rounding the curve at 40 has no idea they are about to cross paths with you. Can anybody win in this scenario?

That’s a heck of a way to start off what is normally a humorous post, I know. There’s nothing funny about a turkey-covered windshield, especially at the moment it happens. In fact, there is really nothing funny about an animal placing themselves in front of a dangerous situation. Even less so, a person. But if you drive, you probably do just that more than once a week.

So, I want everyone to count with me. I’ll go first. One, Two, Three. Your turn.

You may have just saved your life and possibly someone else’s, because almost every day that you drive, you could be first in line at a traffic light. You wait for your turn. Your light turns green. You move forward.

Did you read that carefully? I’ll say it again.

You wait for your turn. Your light turns green. You move forward.

But the other driver is determined to beat the yellow light that’s about to turn red. Or they think they’ll just squeak under the red light.

Or, all too often these days, they JUST KEEP DRIVING long after the light has turned red.

The American Traffic Solutions website recorded that in 2015, two people died every day in red light running crashes. That becomes 60 people dying each month, and that becomes an average of 720 a year. 720 Lives A Year. It starts with two and it doesn’t stop.

In a national telephone survey by the American Automobile Association Foundation for Traffic Safety, 94 percent of drivers said they believe it is unacceptable to go through a red light if it's possible to stop safely. We won't try to figure out the mindset of the other 6 percent. But the bigger irony? In that same survey, 39 percent reported doing so. In the past 30 days.

Remember, the order doesn’t matter. The time it takes you to count does.

In this great state of Vacationland, reckless driving ramps up during the summer tourist season. Sometimes a driver is following another car and doesn’t want to become separated. Maybe they’re lost, or paying more attention to the GPS, or reading a text, or JUST NOT STOPPING. The reasons don’t matter as much as the devastating result.

Several cities use red light cameras now, and statistics show up to a 40 percent decrease in red light violations. But some cities have removed the cameras amid the backlash from an increase in traffic tickets... shooting the danger level back up by 30 percent.

New England winter driving can be harsh, but it is somewhat predictable. The snow and ice don’t make the decision for you. In summer, a lot of other factors come into play. For instance, a holiday weekend equals more cars, more lost tourists, more impatient drivers not always making the best decisions.

I started with some name calling – or is it turkey calling - to get your attention, but what I really want is to ask a favor of you all. Don’t become a statistic. Please value your own life and others on the road.

I’m asking you to resist running a yellow or red light and avoid making what could be a fatal decision. I’m also asking you to always be aware that another driver just might be making that decision for you.

When the light turns green, before you move forward, count. 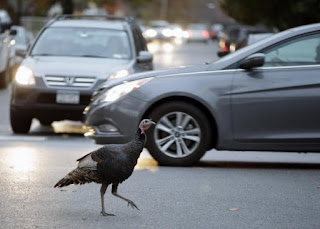